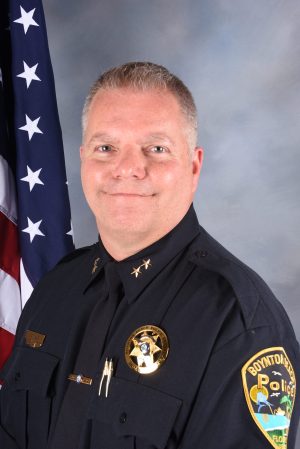 Jack Dale joined the Boynton Beach Police Department in 2022 and currently serves as the Assistant Chief of the Support Services Division.   He began his  law enforcement career in 1989, and previously held a variety of leadership positions within the Broward Sheriff’s Office and the Fort Lauderdale Police Department.  As a colonel with the Broward Sheriff’s Office, he served as the Executive Director of the Department of Professional Standards, the Department of Investigations and the Department of Administration.  While with the Fort Lauderdale Police Department, he previously led the Criminal Investigations Division, Internal Affairs Division and a Patrol District.  Earlier in his career, he served in the uniformed Patrol Division, Street Crimes, Street Narcotics, Major Narcotics, Staff Inspections, Internal Affairs and SWAT.

Assistant Chief Dale hold a Bachelor’s degree in Public Management from Florida Atlantic University and a Master’s degree in Leadership from Nova Southeastern University.  He is a graduate of the FBI National Executive Institute (Session 40), the FBI National Academy (Session 255), and the Police Executive Research Forum’s Senior Management Institute for Police.  As a strong advocate for professional policing, he has served as a department trainer, a firearms instructor, a former member of the FDLE Criminal Justice Standards and Training Commission Training Directors Associations and a former member of the International Association of Police Chief’s Human and Civil Rights Committee.