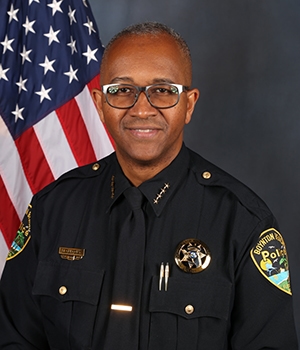 Michael G. Gregory was sworn in as the 30th Boynton Beach Police Chief on July 9, 2018. He leads the Boynton Beach Police Department which serves the third largest city in Palm Beach County. Chief Gregory is a progressive police leader with a focus on building relationships in the community while using 21st century policing strategies to reduce crime. He began his police profession with the Fort Lauderdale Police Department in 1987, where during his 31 year tenure served assignments in each of the Department’s three bureaus. Gregory began his career with the department in Patrol, then moved to Street Level and Upper Level Narcotics, which ultimately led him to Racketeering and Intelligence Administration Units. He has served in a multitude of command roles varying from Information Technology Division, all 3 Patrol Districts, Criminal Investigations Division, Staff Support Division, Special Operations Division and Internal Affairs.

Chief Gregory possess an extensive knowledge in police leadership and technology. As a result of his wealth of knowledge in law enforcement combined with over three decades of experience, he is oftentimes requested to be a guest speaker at law enforcement events, conferences, and community events throughout the nation. He holds a Bachelor of Arts degree in Criminal Justice/Police Science from Florida Atlantic University. With the desire to further his education, he enlisted in the Public Administration program at Florida International University (FIU), where he received his Master of Public Administration degree. He is an avid supporter of higher learning, and currently serves as an adjunct professor in Public Policy and Administration at FIU. Chief Gregory also completed advanced coursework at the Senior Management Institute for Police and is a graduate of the FBI National Academy – Session 248.

In additional to his career achievements, he is an active member of several organizations; including Florida Police Chiefs Association, National Organization of Black Law Enforcement Executives, and International Association of Chiefs of Police. He maintains a firm support on building community relationships and partake in many notable community programs within the city of Boynton Beach.