BOYNTON BEACH – When a 20-year-old man committed suicide, Harley was there to provide comfort to his grieving parents and brother.
When a 19-year-old talked to detectives about being forced to have sex with several men for money, Harley was there and brought a smile to her face.
And when a child was involved in a parental abduction, Harley played with him until investigators could determine that he belonged in his grandmother’s custody.
These are just a few examples of how Harley has made an impact in her first year as a Boynton Beach Police Department Therapy Dog. We will celebrate Harley’s one year anniversary by presenting her with a cake from the Woof Gang Bakery tomorrow at 2 p.m.
“We get a warm welcome wherever we go,” Det. Astrel Labbe, Harley’s partner, said. “People are very positive around her. It’s definitely been nice.”
Labbe, a 15-year veteran assigned to the Special Victims Unit, said that Harley has assisted him with at least 51 cases in the past year – ranging from child abuse and sexual battery to human trafficking and suicides. Harley has also assisted the Child Protection Team of Palm Beach and other law enforcement agencies during their interviews of victims.
In addition to working cases with Labbe, Harley has attended many community events, including the department’s Coffee with a Cop and Shop with a Cop, the grand opening of the City of Boynton Beach’s dog park and the Blessing of the Animals at St. Joseph’s Episcopal Church. She has participated in numerous school presentations and often visits seniors residing in assisted living facilities throughout the city.
“Harley has been a tremendous asset to our agency and the community we serve,” Police Chief Jeffrey S. Katz said. “She has provided comfort to the most vulnerable victims, and we look forward to many more years of her service with us.”
Harley was trained at the Paws & Stripes College at the Brevard County Sheriff’s Office. The Boynton Beach Police Department was the first municipal law enforcement agency to employ a therapy dog.
During the past year, eight other law enforcement agencies from across the country have replicated the program, said Corporal Jessie Holton, who oversees the college, which is completely funded by profits from the Brevard County Jail’s commissary. The next class in October includes participants from the University of Central Florida Police Department and Seminole County Sheriff’s Office, as well as officers from Ohio and North Carolina, Holton said, adding that there are three vacancies available for law enforcement agencies interested in creating a therapy dog program.
For more information about the Paws & Stripes College, visit www.brevardsheriff.com. 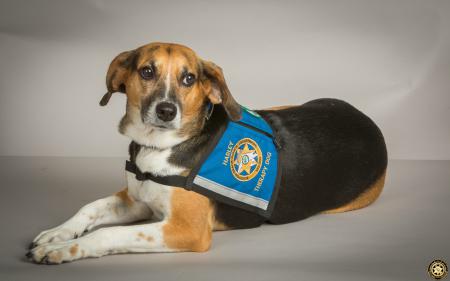