The Boynton Beach Police Department is pleased to announce that Officer Brent Joseph is the 2014 Officer of the Year; Agent Jon Kautz is the Detective of the Year; Communications Manager Mario Bryant is the Supervisor of the Year and Network Coordinator Randy Northrop is the Civilian Employee of the Year.

Officer Brent Joseph
Just one year ago, Officer Brent Joseph was assigned to a call that required he take a report that might later be turned over to a detective to investigate. As part of the first officers to rotate through the Detective Bureau for one year via the Uniform Services Liaison Unit, Joseph can now proudly utilize the title he worked so hard to obtain, Detective.
He actively participated in just about every type of criminal investigation. Many of his arrests gained the attention of local and national news, including that of a woman who posed on Craigslist as a dogsitter and then sold the dog to another person. After a “dogged” investigation, Joseph tracked down the person in possession of the stolen dog and reunited Fluffy with the rightful owner.
Following a series of false 911 calls, to include a bomb threat, a shooting and a naked man with a gun, Joseph obtained a subpoena for a cell phone and developed a suspect. The suspect was interviewed by Joseph and admitted to making the calls because he was bored.
Just as important as arresting someone for committing a crime is exonerating someone so that an innocent person is not sent to jail. That’s what Joseph did in the case of a juvenile who accused someone of dragging her into bushes and raping her. Following an interview with Joseph, the juvenile confessed that she made up the story because she might be pregnant and didn’t know what to tell her mother.
Joseph investigated a stolen F-350 pick-up truck with a trailer containing over $60,000 worth of commercial lawn equipment. His investigation took him to a truck stop on US 27 where he obtained video that led him to two suspects. One suspect was arrested in Homestead by the U.S. Marshal’s Florida Regional Fugitive Task Force and gave a full confession to Joseph.
Joseph also arrested a housekeeper who stole approximately $14,000 worth of property from her elderly employer. Though most of the jewelry had already been pawned and melted down, he was able to recover a silver watch belonging to the victim – and obtain a full confession.
Joseph is also a mentor and role model, his supervisor Sgt. Thomas Wallace wrote in the nomination. He was a team leader in the Teen Academy, works with the Police Explorers, and participated in Shop with a Cop, Cupcakes with a Cop, and the BBPD Holiday Toy Drive.
“I can’t think of anyone more deserving of this nomination,” Wallace wrote.

Agent Jon Kautz
Agent Kautz’s contributions to addressing the narcotics problems in our city are unrivaled. A member of the department’s Narcotics Investigation Unit, Kautz has longstanding relationships with members of the community and the State Attorney’s Office, and has built a sense of trust among defense attorneys and even many of the offenders he arrests. He conducts himself in a manner that emphasizes firmness and fairness, yet treats those he deals with in a way that displays dignity, respect and compassion.
In 2014, Kautz performed 308 hours of surveillance; filed 75 felony charges; 21 misdemeanor charges; attended 174 hours of training; seizure $10,080 cash; 3 guns; 5 vehicles; 22.6 kilograms of marijuana; 71.5 grams of pills; 49.7 grams of cocaine; 2.5 grams of heroin and 8.2 grams of methamphetamine.
Perhaps the most significant contribution he made to the Boynton Beach Police Department in 2014 was his leadership, his supervisor Sgt. Tony Magnanti wrote in the nomination memo. Kautz used his tactical knowledge to assist in the planning and service of all 32 search warrants served by members of the Narcotics Investigation Unit. He stepped forward as a mentor within NIU and on several occasions served as the Officer in Charge of the unit.
“Agent Kautz has distinguished himself as a reliable and trusted leader who is focused on providing the best law enforcement services possible to our citizens and fellow law enforcement officers,” Magnanti wrote. “He embodies our principles of civility, accountability and pride. He is a true asset to our community and agency.”

Communications Manager Mario Bryant
When he was hired by the Boynton Beach Police Department in March 2003, Mario Bryant worked as a communications dispatcher. He was then promoted to communications supervisor.
His experience in both positions made him an ideal choice for communications manager, a position he has held since October 2013.
In the past year, he has worked to revamp the Communications Training Program, address issues leading to excessive overtime usage and making sure the department’s tenets of civility, accountability and pride were adhered to within the unit.
He also worked to establish the City’s Deceased Animal Removal program; prepared and provided stewardship of the Communication Unit’s portion of the Support Services budget; and reinstituted performance-based employee evaluations in Communications; established a new sick leave occurrences policy and guided the City’s P25 radio project through the City Commission approval process.
In addition, Bryant, along with members of the Technical Services Unit, moved the Communications Center from City Hall to Fire Station 5 with little to no noticeable disruption in services.
– Nominated by Major Stewart Steele

Network Coordinator Randy Northrop
The Technical Services Unit was tasked with the responsibility of moving the dispatch center from City Hall to Fire Station 5, which required a complete overhaul of the space to include building a dedicated data center, installing new radio equipment, moving 911 systems and running all new data cables.
Network Coordinator Randy Northrop’s expertise with the radio system, 911 and data infrastructure made him an invaluable member of the project team. His proactive and positive relationship with vendors such as Motorola and AT&T resulted in a smooth installation, and his ability to run data, fiber and phone cables saved the City of Boynton Beach thousands of dollars in installation costs with no reduction in quality.
In addition to all this, Northrop still did all the things often taken for granted, including keeping the phones working, programming of in-car cameras, maintenance of the radio system, portable radio repair, as well as day-to-day tech support and network administration.
Known as “Silent Bob” for just going about his work with few or little words, Northrop’s contributions to the Boynton Beach Police Department are critical to its everyday operation.
– Nominated by Doug Solomon, Technical Services Manager 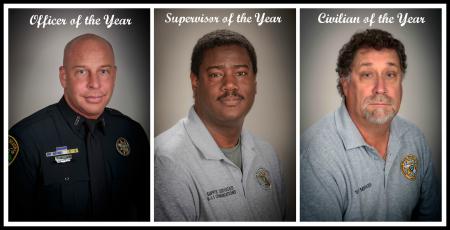