Boynton Beach Police need the public’s help identifying a man who crawled under an occupied bathroom stall at Cracker Barrel, and told a 79-year-old woman he wanted to have sex with her.
The victim told police that she was using the restroom in the restaurant on Southwest 8th Street on Tuesday afternoon when the suspect crawled under the stall. He told her that he wanted to have sex with her and used profanity toward her. She screamed for help and the suspect then walked out of the bathroom.
The suspect is described as a white male in his late 40’s, scruffy looking, wearing a white t-shirt, light colored shorts and a hat.
Anyone who recognizes him is asked to call Boynton Beach Police at 732-8116 or Crime Stoppers of Palm Beach County at 800-458-TIPS. You can remain anonymous. Tips can also be submitted via www.bbpd.org and our MyPD app. 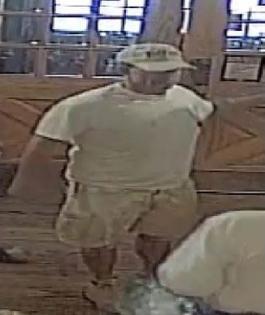