Two women arrested by a burglary task force on Wednesday are suspected of burglarizing two Boynton Beach eateries earlier that morning.
Officers responded to Jupiter Donuts at 2260 W. Woolbright Road at 4:20 a.m., after employees called to say that two women broke into the business with a pick axe. One of the suspects grabbed an employee and walked her around the business, attempting to find a cash register. The suspects fled after they realized there was no money.
The suspects also broke into the neighboring Jersey Mike’s Subs and stole money from a cash register.
Victoria DeJesus and Deztanie DeJesus, both 19, were arrested later that day by the PBSO South County Task Force. Each was driving a stolen vehicle. One of the cars, a burgundy Honda Accord, was stolen on July 29 from a parking lot on Golfview Terrace in Boynton Beach.
Charges against Victoria DeJesus and Deztanie DeJesus for the Boynton Beach burglaries are pending further investigation, including DNA results. 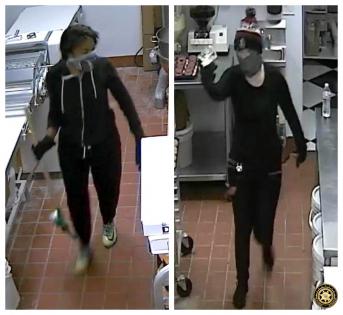