Boynton Beach Police are asking for the public’s help in identifying three men who robbed a 7-Eleven at gunpoint early Friday.
Surveillance video at the convenience store at 2605 W. Woolbright Road shows the suspects enter through the front door at 4:16 a.m. They forced a clerk to open two cash registers and empty the contents.
They struck the clerk several times in the back before fleeing with an undisclosed amount of cash. The clerk suffered minor injuries.
All three males suspects had their faces covered and were wearing white gloves. One male was wearing a blue sweatshirt, black shorts and black socks and sneakers. He held a black handgun in his right hand with no glove on. The second male was wearing a gray sweatshirt with a large black stripe down the center of both arms and dark colored jeans. The third male was wearing a gray sweatshirt and gray sweatpants, and was holding a silver plated handgun. All three were approximately 5-foot-9 to 5-foot-11 with thin build.
Video of the suspects can be viewed here: https://www.youtube.com/watch?v=T2tu9AoWV2U
Anyone with information is asked to call Det. Charles Ramos at 561-732-8116 or Crime Stoppers of Palm Beach County at 800-458-TIPS. You can remain anonymous. Tips can also be submitted via our MyPD app and www.bbpd.org. 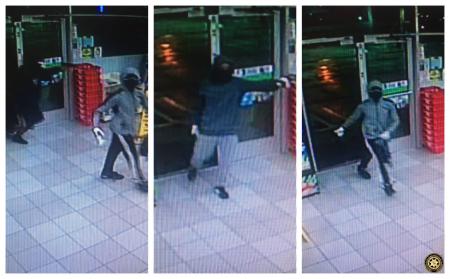