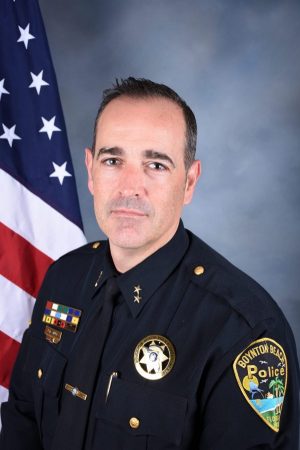 OFFICE OF THE CHIEF

Chief Joseph DeGiulio, began his law enforcement career in New York City in 1998. After graduating from John Jay College of Criminal Justice with a Bachelor’s in Police Science, he worked as a Patrol Officer in East New York, Brooklyn and Manhattan. In 2001 Chief DeGiulio relocated to Florida and worked as a Road Patrol Officer for Boynton Beach Police Department.

In 2002, he worked both as a motor officer and a Traffic Homicide Investigator until he was promoted to Sergeant in 2006. During his time as Sergeant, he supervised the Community Redevelopment Agency Policing Unit, as well as the Community Action Team (CAT Team) and the Marine Unit.

Chief DeGiulio was promoted to Lieutenant in 2012 and was put in charge of a Road Patrol Platoon and carried ancillary management responsibilities over the traffic unit. In 2015 Chief DeGiulio was promoted to Captain and was responsible for the Training and Recruiting Unit. In addition, Chief DeGiulio was tasked with overseeing the daily operations of the Professional Standards Unit as well as the Accreditation and Policy Unit. Chief DeGiulio was responsible for bringing advanced training programs to the department including an advanced tactical fitness program, tactical first-aid, fair and impartial policing and de-escalation training. On top of implementing these programs while Captain, he successfully implemented the Body Worn Camera Program for the department.