Boynton Beach Police have identified the suspects responsible for three early morning robberies that occurred last week within a couple of blocks of each other.
Investigation revealed that brothers Kensson Cineas, 19, and Dutherson Cineas, 16, snatched cell phones from three people walking in the north end of the City of Boynton Beach. Dutherson Cineas was arrested Thursday night. He was charged with three counts of robbery and taken to the Juvenile Assessment Center.
Police are actively looking for Kensson Cineas (see photo below). He is known to frequent the area of Hypoluxo Road and Lawrence Road.
Anyone with information about his whereabouts is asked to Boynton Beach Police Det. Marco Villari at 732-8116 or Crime Stoppers of Palm Beach County at 800-458-TIPS. Crime tips can also be submitted via our MyPD app or www.bbpd.org. You can remain anonymous. 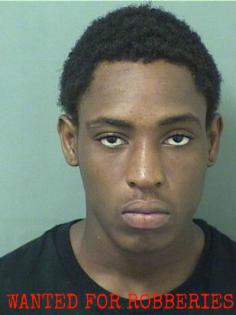